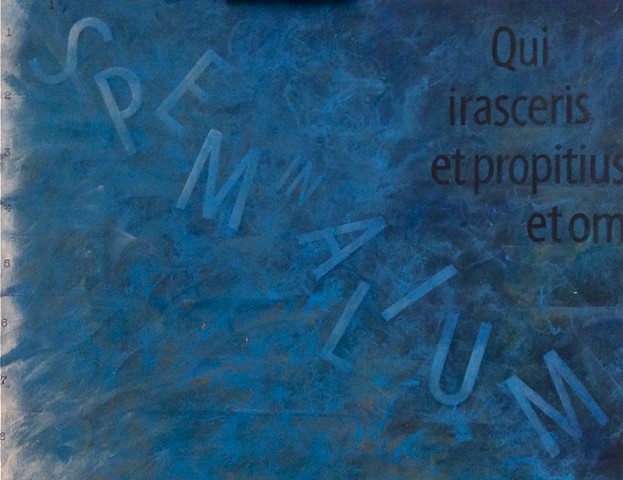 This acrylic painting was inspired by a Biblical text that was set to music by Thomas Tallis (1505-1585). His ‘Spem in Alium’ comprises forty separate choral parts: eight choirs each of five parts. The choir sings the same words at different stages, in a kind of canon, unaccompanied. Music scholars generally acknowledge that the complexity of this piece of music is one of choral music’s pinnacles.

The key objectives in this large-scale painting using the same text as Tallis, were: to include the entire text (in Latin), and to express the quiet, tentative opening of the piece of music (by a single voice, followed by the steady build up in complexity as further voices enter. Towards the end all voices resolve to the words: ‘Respice humilitatem nostram’.

Because of the elongated format of this painting, each of the four adjoining panels is shown separately. The piece is suitable mounted as a mural, in a large architectural setting, unframed.

English Translation: I have never placed my hope In any other than you, O God of Israel, who can show both anger and graciousness, and absolve all the sins of suffering man. Lord God, creator of Heaven and earth, be mindful of our humiliation.